It’s great to be able to press a labelled key on your phone to make a call to a colleague in your office, or to an external mobile or land-line without having to find and dial a phone number. After all, names mean more to us than numbers do! … It’s even nicer, if these keys are labelled using a display rather than paper, as they can be changed – quickly and neatly – in line with staff changes, and your contact priorities.

Phone manufacturers are finding ways for us to present a lot of keys to you using ‘pagination‘. Pagination means that the same key & display can have different functions and labels, depending on which ‘level’ or ‘page’ you select. For example, Yealink T41S phones have six programmable keys around the display area of the phone. Key 6 is used to ‘paginate’ through three layers, giving these keys, a total of 5 x 3 = 15 destinations and/or functions. The Yealink T46G does the same 3-layer pagination, with 10 keys (9 x 3 = 27).

VoIP phone manufacturer Fanvil, have taken this a step further with their X4 and X6 phones, providing additional colour LCD displays with six keys, and twelve keys respectively, paginating through up to five layers. 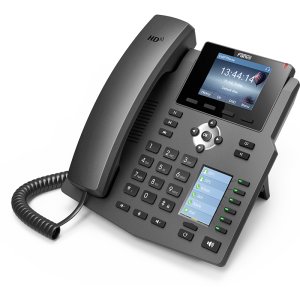 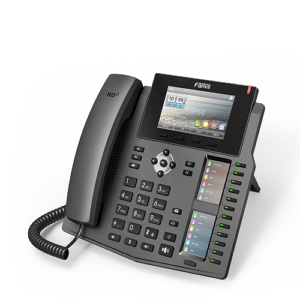 The colour LCD at the top of the phone is used to show call info and status, while the lower display[s] are divided into strips to assign functions to the small keys to the right. A separate key is provided below the LCD, to paginate the key-labels without having to sacrifice a display key. 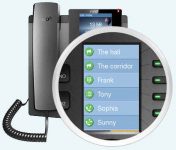 These keys are commonly known as ‘Direct Station Select’ – or ‘DSS‘ keys, but can be assigned many types of functions to either access system features, or to call people. When the key is set up as a BLF [Busy Line Field] a small LED shows in the key – glowing green, red or flashing-red – to show that the assigned extension is free, busy, or ringing. These keys not only show the status of a colleague’s extension, but also allow you to one-touch transfer to those extensions, or even pick-up a ringing call on their phone. With a combination of configured DSS keys, and a central system ‘Phonebook’ – you should never need that paper label or extension & contact list ever again. Say goodbye to that dog-ear’d extension list taped to the side of your phone! …

A Yealink T46G phone set up as a Reception phone, can have an expansion module connected to it to present up to 57 DSS keys. However, the Fanvil X6 can present up to 60 DSS keys without the need for any added key modules. For a smaller company, the X4’s presentation of up to 30 keys can be more than enough! Fanvil’s extensive feature set, and HD audio – combined with an aggressive pricing policy – makes the X4 and X6 extremely cost effective and powerful business phones to combine with Foxhall’s 3CX and Yeastar IP-PBX solutions.