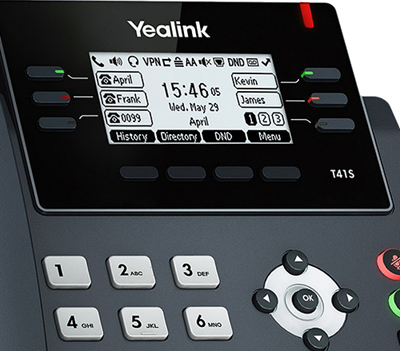 In October of 2017, Powerpoint Electrics Ltd. (PEL), had their elderly telephone system replaced with a Yeastar S20 VoIP system, as part of an upgrade of their ‘Message/Music on Hold’ service that provided information to callers while on hold or being transferred. Although the system provided some new [basic] VoIP phones that used their computer network, the S20 system still connected to four existing analogue lines, just as the previous system had done.

This system was a prime example showing that ‘going VoIP’ has various degrees of implementation, and allows us to show what can be done to enhance business processes when the full capabilities and options available are explored and actually put to good use …

In June 2019, PEL committed to a two-stage upgrade of their phone system by Foxhall Solutions. The first upgrade project has been completed and has replaced eight basic T21P phones, with Yealink T41S and T46S enhanced ‘business’ grade phones. In addition, we have provided a ‘remote’ T46S phone to be used at the Managing Director’s home office.

This phase of the upgrade has given Powerpoint Electrics the following benefits:

The second phase of the project will occur in early 2020 when contracts on PSTN lines expire. At that time, Foxhall will arrange for the ‘porting’ of PEL’s business number into a SIP trunk group that will be configured as an alternate set of ‘lines’ on the Yeastar S20 system. While phase one of the project represented a one-off investment for PEL, this phase is all about reducing on-going costs!

This project will bring the following business advantages to Powerpoint Electrics Ltd.;

For Powerpoint Electrics  – upgrading to a VoIP system was just the first step. Being aware of what their VoIP phone system can provide in addition to just ‘dial-tone’ is important so that they can get the best return on their investment, and ensure that the ongoing cost of ownership of their system is low.